European societies are ageing at a rapid pace. This is best illustrated by the increase in the number of people aged 65+ per 100 people aged 15-64 (old-age dependency rate). While in 2006, in the EU28 there were 25 people at the age of 65+ per hundred people aged 15-64, in 2017 there were almost 30, and in 2050 there will be more than 50. The progressive demographic ageing of the population is accompanied by the ageing of the labour resources at the age of 20-64. An increasing part of labour force aged 20-64 has already reached 55 years of age. On average, in the EU28 there were 17.3% of them in 2017 – an exceptionally high percentage, over 20%, can be found in Germany and Lithuania (Graph 1). These significant changes are demonstrated by a high growth rate of the share of people aged 55-64 among those working in the entire EU – in 2000, this group constituted only 10% of people aged 20-64. 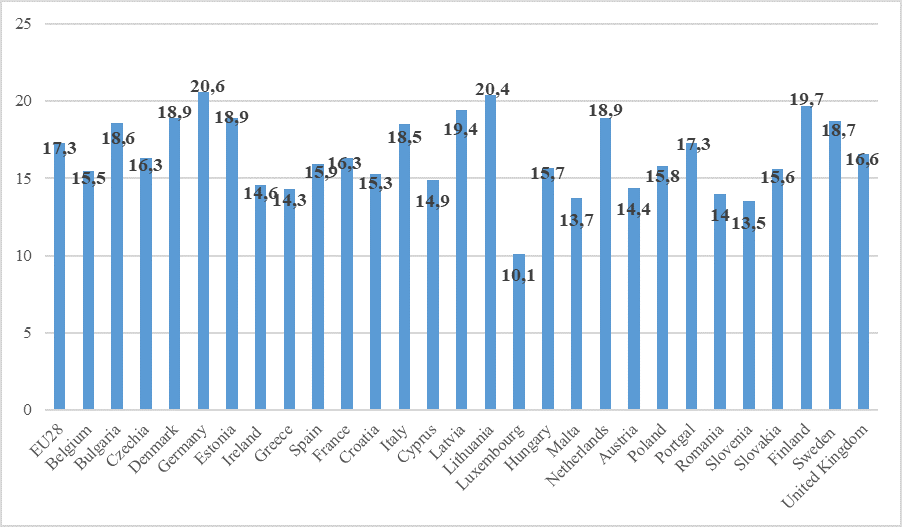 Source: Own calculation based on Eurostat lfsi_emp_a

There are many reasons underlying the increasing professional activity of people aged 55-64. As a result, more and more of them decide to continue their career – in 2005 in countries such as Austria and Slovakia no more than 30% of people aged 55-64 remained in employment whereas in 2017 – at least half of them. The highest percentage is reported in Sweden – 76.4% and Germany – 70.1% (Graph 2). The lowest professional activity of older employees can be noted in Greece (38.3%) and Luxembourg (39.8%).

As a consequence of the ageing labour resources in EU countries,  employers’ awareness is that not only it will be increasingly difficult for them to find middle-aged and younger employees, but also they will have to deal with workers who are at least 50 years old. They are a valuable human capital for the company, they know its corporate culture.

The situation of 55+ people in the labour market seems quite good since the unemployment rate in 2017 is on average lower among the older people than younger ones in the EU28 – 5.9% among people aged 55-59 and 5.6% among those who are 60-64 whereas 16.8% and 10.0% among the young people aged 15-24 and 25-29 respectively. However, job loss after the age of 55 is associated with great difficulties in finding new employment. As a result, the group of older people who are jobless includes a significant percentage of long-term unemployed and so-called discouraged workers, i.e. those who grew frustrated by the long-term fruitless search for employment and thus withdrew from the labour market and chose inactivity instead. If they succeed in finding a job again, they are paid on average 25% less than before (calculations for the US labour market in 2018). It is estimated that in the US 15% of college-educated older workers are doing low-paying jobs.

A possible solution: Better information, analysis of the ageing employees’ impact on the employment by occupation and specialities – a long-term approach

According to the Directive of the Council of the European Union 2000/78/EC on equal treatment in employment and occupation as well as the implementation of one of the Autonomous framework agreement on active ageing and an inter-generational approach goals –  Increasing   the   awareness   and   understanding   of   employers,   workers   and   their   representatives of the challenges and opportunities deriving from demographic change, it is the trade unions’ interest to make an effort to maintain ageing employees in employment.

Therefore, trade unions should draw attention to the situation of 55+ people in the organisation, participate in the talks with the management about possible shifts of older employees to other jobs within the organisation and strive to minimize the possibility of older employees’ dismissal. In addition, they should rise the older workers’ awareness of both their rights and risks they are exposed to in the labour market due to their age.

Return to the Welcome